So my little win to Bali got me thinking about my last trip to Indonesia 6 years ago….

The reason for my visit was to spend 6 weeks volunteering in jungle clad Borneo, sleeping in hammocks, chopping, chiselling (I still bear a scar on my arm from one of my many fights with the chisel), and sawing away to build an outhouse that was to be a part of a new refugee sanctuary for orphaned Orang-Utans. We were based all the way south of the island deep within Indonesian Borneo or ‘Kalimantan’.

I would love to sit here and talk all day about my time in the jungle, but I’m not going to focus too much on that right now as what I want to talk about in my next couple of posts is the week I spent afterwards – my week in Java. Nestled between Sumatra and Bali this island keeps itself fairly low-key throughout the tourist trail yet is home to quite possible some of the most impressive and stunning places I’ve seen on my travels.

On the morning after our volunteering experience had come to an end, and feeling a little worse for wear after a few celebratory rounds of Arak  – take a sip and pass it on to the next poor unsuspecting participant…anyone who has ever shared in this social convention of sorts will know what I mean when I say ‘Yikes!’ This stuff will grow an extra layer of hair on anyone’s chest! – the idea of sitting on a packed out boat for 24 hours was not filling me with a warm fuzzy feeling, which ironically was the feeling that the Arak had been giving me the night before. But as you do, you suck it up and roll with the punches, and seeing as these ferries tend not to run on schedule or on a regular basis and that we would’ve more than likely have had to have waited at least 4 or 5 days more to catch the next ferry had we missed it, the few of us who needed to, boarded our ferry that morning to take us from Kumai to Semarang.

The boat trip in itself was quite an experience. Finding a section of cots that would sleep all 4 of us, we dropped off our bags and went for a wonder. We were clearly the only foreigners on board and would often catch the gaze of curious onlookers. Throughout my stay in Borneo I had grown accustomed to being approached and stroked on the arm by local women fascinated and seemingly in awe of our skin. Whilst we over in the UK and many western societies spend time, money and many hours of dedication in the sun trying to turn our pasty white skin to a bronzed gold  – the people here, it seemed, have the desire to have whiter skin. They even have cosmetic products that produce a paler complexion, much like we would use a fake tan. It struck me as interesting that no matter where we are in the world or how remote a place may seem, vanity will always take on its own form and women (and men) will somehow want to look differently to how they do.

Once the captain had caught wind that there were 4 random westerners on board his vessel we were immediately ushered up to the Bridge to be introduced and shown around. They were so eager to show us where they worked and how proud they were to work there. These men would sometimes spend weeks/months away from their families and loved ones yet they didn’t seem to have a complaining bone in their bodies, content in knowing that they had a highly respected and sought after job.

To have had this interaction with the crew on any other day would have been great, but today, on zero hours of sleep and a belly full of rocket fuel it was all I could do to politely offer the occasional nod or mutterings of ‘thank you’ or ‘wow that’s great!’ and so when an hour of talking and looking around came to an end and we were finally released, I said my goodbyes and made a bee line for my cot!

20 hours and a few broken sleeps later we had arrived into Semarang, disembarked and were now casually bumbling our way towards Surabaya on a local bus. By this point we had waved off one of our girls who instead of seeking out a volcano to climb was headed towards her second lot of voluntary work at an Elephant sanctuary in Thailand.

So then there were three.

Surabaya is basically your point of call from where to negotiate a private tour, or to join a group tour, or simply how to get yourself to where you needed/wanted to be. We weren’t too sure of what to expect only that we knew the places we wanted to see and that Surabaya was the place to arrange it from. The bus dropped us off at the bus station, which sat within a big square surrounded by local travel agents and street food sellers and markets – it was night time by now but the place was still buzzing with life and atmosphere. We popped our heads into a few travel agents and finally settled on one that seemed to offer us exactly what we wanted. We sat in their small office chatting and discussing over a couple of local beers, these were my kind of people.

By the time we had shaken hands and come to an agreement it was too late to find somewhere to sleep, so we were invited to stay at their home. Our pick up would be in the early hours of the morning and from there we would start our journey towards our first stop – Mount Bromo!

To see it is to believe it. You arrive at night and have to walk the final few hundred feet up to the viewing point; there are mules that you can use to hike you up the steep ascent but, this being something I have never felt is a particularly fair burden on the animals (my own personal view) we trudged our way up by foot. The walk up is pretty easy, nothing too strenuous, but, we had completely failed on our clobber! Note to self – it gets pretty cold walking up a mountain in the middle of the night, no matter what country you’re in! Luckily this was quite a common failing of common sense as throughout the climb there were kiosks hiring out coats and hats and gloves to keep you warm. We took full advantage of this and I have to say I think the outfits were rather fetching, completely glamorous and absolutely something I would pay to wear at home given the chance!! Hmmmmm – or maybe not:

Ready for the final climb to view Mount Bromo – Indonesia 2008

At the top there was a large crowd all eagerly awaiting sunrise – whispers of how spectacular the view was meant to be raising even more excitement throughout. Although there are lots of people you will always be able to find yourself a good view, we had a front row seat sat on a low sitting crumbling step.

Here are a few snaps of what we saw as the sun was rising and in full daylight:

On top looking down

I hadn’t expected anything even close to this; the whole thing just kinda blew my mind! I love anything to do with dramatic landscapes and this certainly was one to remember.

The drive to Ijen Crater was a long one. We broke it up by stopping for lunch at a beach and taking a trip out on a traditional Indonesian fishing boat, or ‘Jukung’, to spot some fish.

We had to stop for the night in a tiny village in the mountains – although there was a small little guest house for us to stay in, the place still felt so unused by tourism that it almost felt like we were trespassing into these people’s home. However, they couldn’t have been more friendly – a trait that was becoming more and more apparent throughout Indonesian culture and that created a sort of magic about their country – or at least the places that I had been to and the people that I had met.

In the early hours of the following morning we headed towards the base of Kawuh Ijen – we were to walk our way to the top. It was steep and it was relentless – and it hurt!

You may have seen documentaries on this particular volcano – it is used as a sort of sulphur mine. Everyday, workers will hike their way to the top and then hike their way down into the crater where they will load themselves up with back breaking amounts of sulphur. They then hike all the way back up and then back down the other side to distribute their collections in order to be paid a piddly amount of money just enough to be able to feed their families. They will do this all day everyday! Now when I say back breaking I mean they have actual broken bones that have to go untreated and because of this they have disfigurements to their backs and shoulders – yet still they work. We stopped to talk to a few men who showed us the effects this work has had on their bodies. It was beyond shocking and upsetting. They gave us a go at carrying their loads so we could feel how heavy they were – I managed to hold it for a few seconds – and I consider myself to be fairly strong! 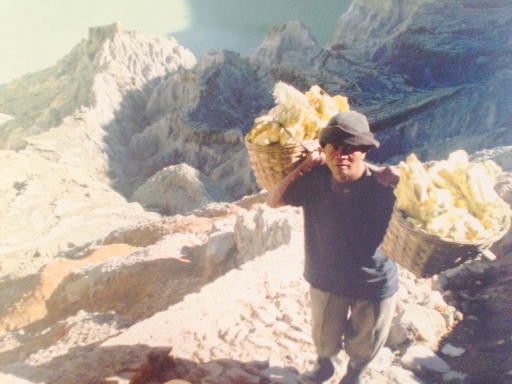 Miner carrying his load of sulphur up the crater 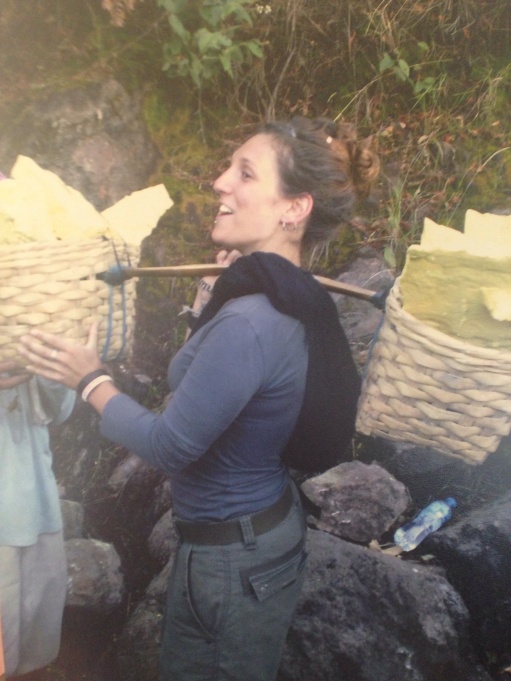 My attempt lasted a mere few seconds – you wouldn’t believe how heavy these bundles can get!

Its quite a sight at the top of the crater, large yellow sulphur flumes can be seen bellowing out from beside the highly acidic crater lake. Whilst the lake is beautiful to look at and fascinating in terms of its existence, the lack of safety precautions (there are none) only adds to the dangers and risks that are included in this sulphur mining industry. 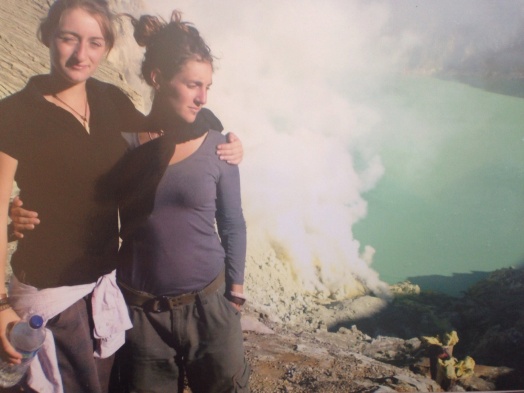 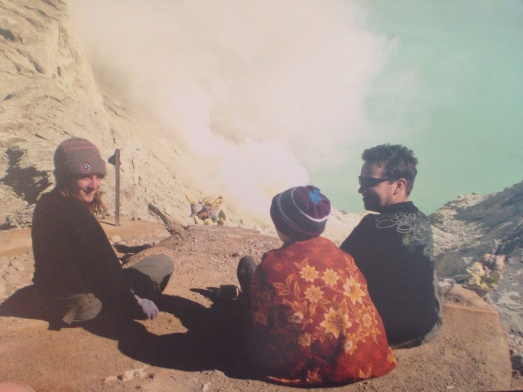 My visits to two different volcanoes were completely different experiences – both however left me with feelings and thoughts that will last forever. Some happy, some sad and some I’m not really sure how to explain – humbled perhaps, from both the magnificence that this planet can produce all by itself far outshining any man made structure, and also from witnessing the endurance man will put himself through for no more reward other than food in his belly and a roof over his head. The latest smart phone, computer game or high street label is of zero relevance in their lives yet still they have a smile on their face and a welcoming handshake to offer. 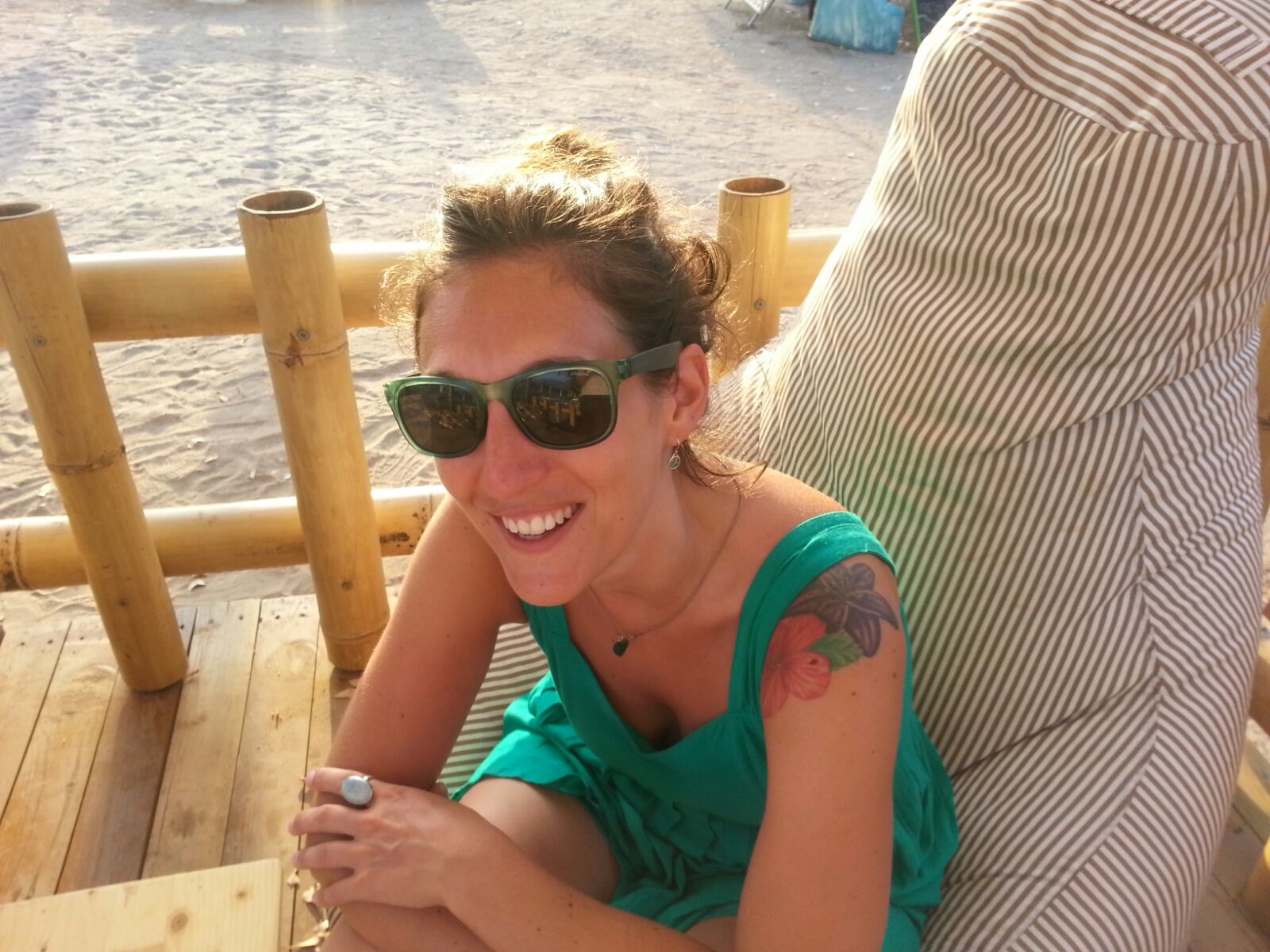